St. Mary’s Parish (Paroisse Sainte-Marie) derives its name from the beautiful bay which the church overlooks, St. Mary’s Bay (Baie-Sainte-Marie ). The name also marks the parish’s devotion to Our Lady of the Assumption, the patron saint of the Acadians, represented by the gold star on the Acadian flag.

Take me to the Cemetery Page

In 1903 construction of the present church was undertaken under the direction of Father Pierre-Marie Dagnaud, C.J.M. (1902-1908). Saint Mary’s parish church (Église Sainte-Marie), has the honour of being North America’s largest wooden building; its construction was entrusted to a local builder, the self- taught master carpenter Léo Melanson, with the assistance of many parishioners. Today there are two active cemeteries associated with the parish. 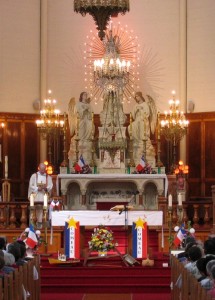 The beautiful faux marble pillars inside the church are plaster and were painted by Stefano (Steve) Genette. Born in Italy, Stefano (Steve) established himself at Little Brook (Petit-Ruisseau) where he married a local girl, Charlotte LeBlanc. While in Paris, Stefano had mastered the art of making plaster objects (the Stations of the Cross are another example of his work); he also became an expert in the art of faux painting plaster to have it appear as marble. 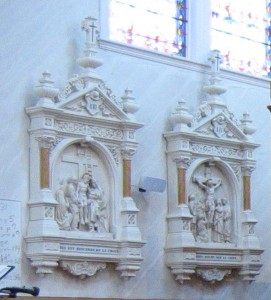 St. Mary’s Church attracts thousands of tourists annually. Among treasures and furnishings of note to visitors are a precious reliquary, exquisitely crafted by an Acadian artist from the region, and a fine collection of religious and liturgical artifacts exhibited in the museum room (established in 1970). This museum inside the church is open to the public throughout the summer.

The present Saint Mary’s parish church (Église Sainte-Marie) is actually the fourth church to have been constructed at Church Point (Pointe-de-l’Église).

On June 20, 1799 Reverend Father Jean-Mandé Sigogne, exiled from France during the French Revolution, arrived at Baie-Sainte-Marie (Clare Township). This was a day of rejoicing for the Acadians of the area as this marked the arrival of their first resident spiritual leader. Père Sigogne, as he became known, set to work building the first baptismal font and then a new church to replace the existing mission built under the direction of Père Mathurin Bourg. This was the third church erected at Baie-Sainte-Marie and the second at Church Point (Pointe-de-l’Église); construction began in 1806 and was completed in 1808 with the blessing of the new church on May 1st, 1808. This church was destroyed in the Septemer 1820 fire which burnt everything in its path, from current day Little Brook to Church Point, a distance of four miles (18 houses, 23 barns, and sadly, also the church and rectory). Only two houses were spared.

A new church and rectory were built between 1820 and 1829. This church served until 1903 when construction of the present (fourth) church began.

An interesting video has been produced, published on YouTube Jun 12, 2014; it is a drone video of the Université Sainte-Anne Campus, L’Église Sainte-Marie, and the Church Point shoreline. Note – If this link stops working, kindly report (email address under Contact Us).