The history of Stella Maris Parish (Paroisse Étoile-de-la Mer) and its churches in Meteghan is a story of tragedy and perseverance.

The parish which was to later be known as Stella Maris Parish (Paroisse Étoile-de-la Mer) was established by Père Jean-Mandé Sigogne in 1815, and the first church, St. Mandé, was consecrated in 1817. Père Sigogne was the first resident priest at Baie-Sainte Marie (Clare) and in the years starting with his arrival in 1799, residents of the Meteghan area had to travel to the only church at Baie-Sainte-Marie, the church at Pointe-de-l’Église (Church Point) which could be a three day journey in those early days. Not surprisingly, the people of Meteghan and environs requested that a second church be built, this one to be located in Meteghan.

Initially, there was discussion of a church at Meteghan River but that did not occur. Construction of a new church in Meteghan began in 1815; the altar stone was blessed in May of 1817 and on Nov. 9, 1817 the new church, Église St-Mandé, was blessed by Père Sigogne. In 1849, Monseigneur William Walsh, Bishop of Halifax, blessed an addition to the church and the church was renamed St. Martin, with the parish named Étoile-de-la-Mer.

By 1885, the parish had grown to the extent that it had outgrown its small church and construction began on a much larger replacement brick church; the old Église St.-Martin was demolished in 1888 and the new brick church, the first “Étoile-de-la-Mer” or “Stella Maris” was blessed. In a parish publication, it is reported that at this point, the Latin version of Étoile-de-la-Mer (Stella Maris) was used for the church and the parish name. The first mass celebrated in this new brick church was the Midnight Mass on December 24, 1888; my maternal grandfather, Joseph LeBlanc, was the first child baptized in this new church on December 24, 1888. 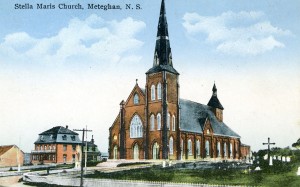 This beautiful brick church and rectory were destroyed by fire on May 20, 1943. A large Parish Hall served as the ‘second’ Stella Maris church until December 1967, when the new ‘third’ Stella Maris Church was completed and blessed. 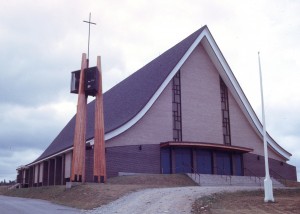 The present ’fourth’ Stella Maris Church was blessed in 1972 by Monseigneur Austin Burke and still stands today. It has a very modern exterior design and the interior is beautiful, architecturally and acoustically.

Stella Maris (Meteghan) Parish initially included the communities of Meteghan River (south of the bridge), Meteghan Centre, Meteghan, Meteghan Station, and St. Martin. There are two active cemeteries in the parish: one is located adjacent to the church and the second, newer one, is located in Meteghan Centre across from the Clare Medical Centre. Both are on Route No. 1