Oral history says that the first mass at la Rivière-aux-Saumons (Salmon River) was held in 1813 at the home of my ancestor, Jean Deveau and his spouse Marie Maillet, officiated by Père Sigogne. We have to rely on oral history passed down as no records remain – the area was repeatedly ravished by fire.

The inhabitants were parishioners of Sainte-Marie (Church Point, Pointe-de-l’Église) until 1817 when they became parishioners of Stella Maris (Étoile-de-la-Mer, Meteghan).  It is believed that a small chapel was originally built on the road leading to l’Anse-à-David and that the priests boarded at the homes of Cyprien Martin or Mathurin Deveau when they visited the chapel.  It is also believed a small cemetery existed on this site but the records have been lost to fire.

The Parish of St-Vincent-de-Paul was established ca.1846 and served the inhabitants of Salmon River (la Rivière-aux-Saumons), part of  Mavillette, Woodvale and Beaver River (Rivière-aux-Castors). St-Vincent-de-Paul Parish also had a mission church, St-Cléophas, at Hectanooga which also served Lake Doucette (Quaco or Lac-des-Doucette) from 1908 to 2007.

The first church for which we find records was built on the same lot where the present church stands but off to the side, approximately where the statue of the Madonna stands. This wooden church was replaced in 1907 by a field stone church which burned in 1911. This is a photo of that church, taken between 1907-1911 (Photo courtesy of Gerald Comeau). 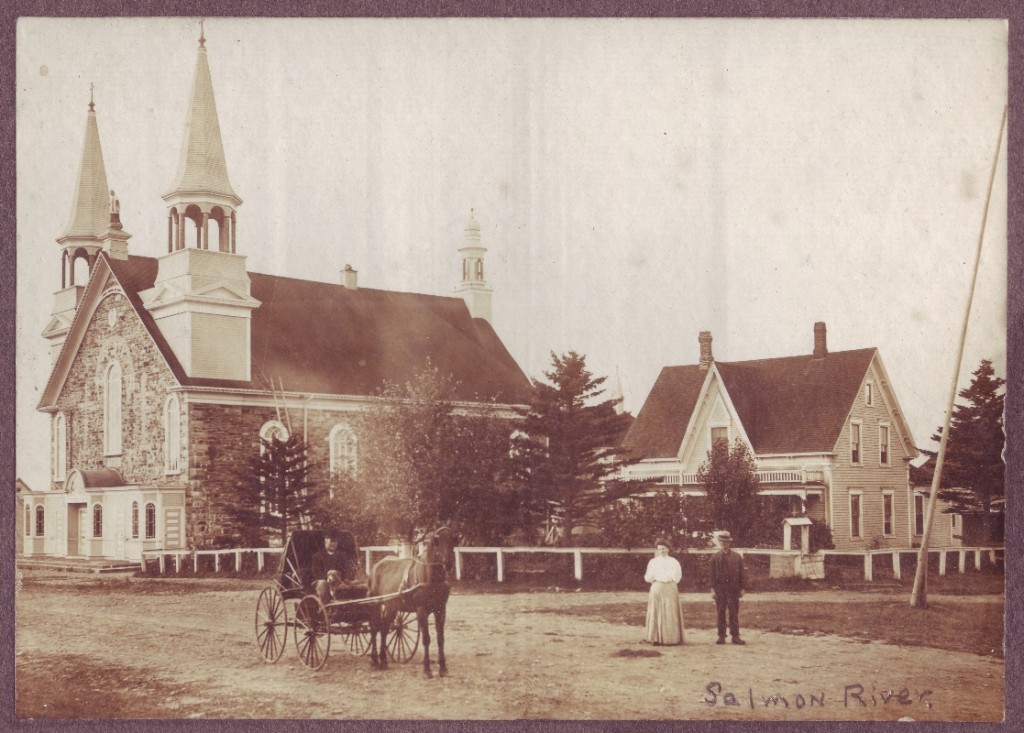 After the 1911 fire which completely destroyed the church, construction began immediately on a third church which ministered to the parishioners until 1945 when a fourth church was built.

A bilingual monument was unveiled August 11, 1986, on the occasion of the centenary of the parish — St Vincent de Paul parish was founded by Bishop Walsh of Halifax on August 11, 1846. The land was donated by Mathurin Deveau & Cyprien Martin.

This church served the parishioners until 2012, at which time it was de-commisioned, and sold; at that point, the parish of St Vincent-de-Paul (Salmon River, la Rivière-aux-Saumons) was merged with Stella Maris (Meteghan).

The cemetery is located behind the church and is still active in 2014.