St. Jean-Baptiste church in Corberrie was the seventh of nine churches built by Père Jean-Mandé Sigogne during his time at Baie Sainte-Marie (1799-1845). This church was located at the crossroad of Chemin Patrice and Route 340. St Jean-Baptiste Parish was always a mission parish: first for St. Bernard, then for Weymouth, and until 2007, for Notre-Dame-du-Mont-Carmel Parish of Concession. This mission church served Corberrie, Havelock, New Tusket and Richfield.

The cornerstone for this church was blessed by Père Sigogne  in 1837 and the church completed and consecrated in 1841. St. Jean-Baptiste church was formally recognized as a Heritage Property in 1991. At the time of this designation, the church was considered significant because of its association with Père Jean-Mandé Sigogne (and Frédéric-Armand Robichaud) and as the second oldest Roman Catholic Church in Nova Scotia.

St. Jean-Baptist church was a wooden frame structure with a front tower attached to the main nave. Significant features included the gabled roof, Romanesque Revival style windows, a shingled steeple as well as the cemetery surrounding the church.

Dr. Gerald C. Boudreau has described it quite nicely in French:

St. Jean-Baptiste church remained active until 2007 after which it fell into disrepair. In 2015, it was one of the last three remaining structures built by Père Sigogne, the other two being the mission chapel at Bear River and Sigogne’s presbytery in Church Point which had become a private home. Attempts were made to save the St. Jean-Baptiste church but alas, they were not successful and this heritage property, a testament to our past, was torn down April 8, 2018 and many of the contents of the church ended up at antique dealers. 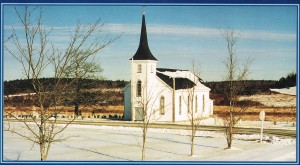 Surrounding the Saint-Jean-Baptiste mission church is a small cemetery.