A few miles east, going inland from Church Point (Pointe-de-l’Église) is the small community of Concession.

On Nov 10, 1901, Père Dagnaud, the parish priest of Paroisse Sainte-Marie from la Pointe-de-l”Église (Church Point) met with the inhabitants of the community of Concession to discuss the possibility of building a church at Concession. The response from the community was very positive and after a few days of conversations with each family, the decision was taken to build the church. A small plot of land was immediately donated by Léo H. LeBlanc and most parishioners agreed to donate 25 days of labour each. Additional land was purchased from Léo à Henri LeBlanc for five dollars.

Léo Melanson was hired to manage the project and wood for the construction was donated by people from Concession, Church Point and Saulnierville. Logs were felled by donors and taken to the Cyr LeBlanc sawmill for prep work.  On April 6th, 1902 the corner stone was blessed and the masonry work began on the foundation.

October 28, 1902, the the newly completed church, Notre-Dame-du-Mont-Carmel, was blessed. This church is located on the corner of the ch. Patrice Road and the Second Division Road. 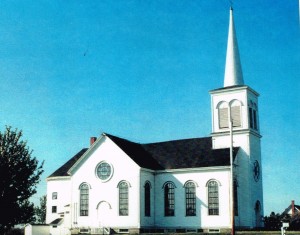 The first funeral mass was on Jan 27, 1903, for Sévérin LeBlanc, husband of Élizabeth Comeau (Élizabeth was Sévérin’s second wife).

The first marriage was that of Olivier Boudreau and Agnès Corporon, early 1903.

The first confirmation ceremony was held July 27, 1904, where 13 boys and 12 girls were confirmed by Monseigneur O’Brien, Archbishop of Halifax.

The parish cemetery is approximately one half mile south of the church on the Second Division Road.