The first settlement of Baie-Sainte-Marie and the beginnings of religious life for its inhabitants occurred within the boundaries of what is now Saint-Bernard parish: Île-à-Piau, Pointe-à-Major and L’Anse-des-LeBlancs are all located within this parish.  It is in this parish that the first child (Joseph Dugas) was born (1768) and baptized at Baie-Sainte-Marie and where the first marriages were blessed after the return from exile. The first burials were at Île-à Piau (1755-1756) and later at Pointe-à-Major.

Although all those events occurred within the modern-day boundaries of St Bernard parish, the first organized parish at Baie Sainte-Marie was Sainte-Marie (Chrurch Point, Pointe-de-l’Église).

A church was not built at Saint-Bernard until 1855; until that date, the parishioners were served by the priests at Paroisse Sainte-Croix in Plympton and Paroisse Sainte-Marie in Church Point (Pointe-de-l’Église). Construction of the first church in St. Bernard took place between 1853-1855. Monseigneur William Walsh, Archbishop of Halifax, blessed the new church at Saint-Bernard on June 20, 1855. This  church was located on the ch. Petit Paradis Road, with the parish cemetery adjacent to the church.  At that time, and until 1905, this church also served the Catholic missions of St-Joseph (Weymouth) and Saint-Jean-Baptiste (Corberrie). More

Following are the priests who served at St. Bernard parish

There was no resident pastor at St Bernard from 1855-1868: during this time frame, the parish was served by the pastors of Sainte-Croix (Plympton) and Sainte-Marie (Pointe-de-l’Église). The first resident pastor at Saint-Bernard was Father J. Quinan in 1868. He registered the first baptism in the parish, that of Pierre Blin, son of Joseph Blin and Marie Mius. Pierre Blin was baptized Jan 26, 1868; the godparents were Gabriel Charles and Magdeleine Charles.

The first presbytery was built by Father d’Homme 1877-1880; he  was the first French priest to serve the parish. He apparently had the presbytery built with several rooms large enough to be used as classrooms for the education of parish children.

Father Mihan blessed the Way of the Cross (Chemin de la Croix) at Saint-Bernard on October 30th, 1881 and that at the Corberrie mission on 3 September 1882.

When Father Alphonse Parker took charge of Saint Bernard parish in 1888, he was also assigned the missions of Sainte-Croix (Plympton) and St. Jean-Baptiste (Corberrie).

The Saint-Bernard church was built with 8000-plus blocks of Shelburne (Nova Scotia) granite which was brought in by rail car from Shelburne to Little Brook Station (a distance of 120 miles) and then taken by ox cart, over a gravel road, to the construction site one and three quarter miles away. The parish was determined to not incur debt so the church took thirty-two years to build.

Two men with their ox-teams, working alternatively, carted these huge granite stones over a period of twenty years, weather only allowing this work to be conducted seven months of the year. All stones were cut by hand with hand tools which were kept sharpened by local blacksmiths.

Father Élie LeBlanc, who became pastor in 1937, was tasked with overseeing the completion of the new church and witnessing its blessing in 1942. The new church was blessed by His Excellency Archbishop McNally on September 1942 and the first mass was celebrated in French. 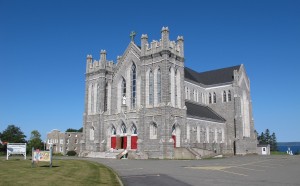 Jeanne Doucet-Currie wrote a song about the building of the Saint-Bernard church – following is one of the verses, a testament to the strength of a people. St Bernard Parish is where our dear friend Jeanne was born and received all the sacrements. She expressed her love for family, friends and her Baie-Sainte-Marie Acadian heritage in her writings, her songs and every breath she took.