Holy Cross Parish (Paroisse Sainte-Croix) has a long history in Digby County. Although Holy Cross Parish (Plympton) is not part of Clare (Baie-Sainte-Marie), many of the inhabitants had their origins in Baie-Sainte-Marie and therefore one sees many of the same surnames (Comeau, Melanson, Thibault, Amirault, Theriault and others). For that reason, we have included Holy Cross cemetery and parish on our website.

In December 1818, Father Anssant was sent from France to assist Père Jean-Mandé Sigogne, the pastor of Paroisse Sainte-Marie in Church Point. Father Anssant was given charge of two missions: Saint-Mandé (Meteghan) and Sainte-Croix (Holy Cross, Plympton). At the time, the Catholic mission of Sainte-Croix (Holy Cross) in Plympton covered the town of Digby, Bear River, Digby Neck and the Islands to the east, and to  the west, as well as Corberrie, Weymouth and parts (east) of Saint Bernard.

Father Anssant administered baptism in Plympton for the first time on January 14th, 1838, to  Suzanne-Henriette Comeau, born the same day. Suzanne was the daughter of Olivier Comeau and Françoise Thibault.

In 1881, construction began on a new church to replace the chapel. The Stations of the Cross were erected in 1890 to coincide with the completion of the new church. Construction on the rectory began in 1891 and was ready for the arrival of the new resident pastor, Father Louis Decheneau, in 1892.

Between 1818 and 1909, Holy Cross Parish was served by priests from away: from France, English-speaking priests of mostly Irish origin and French-Canadians from the province of Québec. In 1909 Holy Cross parish was finally able to welcome one of its own sons, Father P. Thibault, who remained pastor until 1923. During Father Thibault’s tenure, a mission church was built in Doucetteville. Father Thibault was followed by Father Michael Doucet (1923-1929) and Father Luc Gaudet (1929-1943). {More about the pastors serving Holy Cross Parish}

It fell upon Father Luc Gaudet to rebuild the church and rectory after the disastrous fire of June 3, 1938 destroyed the church, the rectory, the parish hall and three outbuildings in the space of an hour and a half. As reported in a local newspaper at the time:

“…Father Luc Gaudet, parish priest, told the press he was eating his dinner when he was told the church was on fire.Entering the building, he found the flames coming through the floor from the basement, and were breaking out in all sections…”

The only items saved in the 1938 fire were the blessed sacrement and vestments (from the church), furnishings and parish records from the rectory) and some furnishings in the new parish hall.

In May 1939, less than one year after the fire, the cornerstone of a new church was was blessed; the new church took ten years to complete. At this time, Holy Cross Parish served not only Plympton inhabitants but also those of its missions at Doucetteville, Marshalltown and Digby Neck.

After 1948, Holy Cross Parish had only one mission church, that at Doucetteville.  Responsibility for the missions of Marshalltown, Digby Neck and Freeport was transferred to the town of Digby. The parish of Holy Cross now encompassed Plympton, Plympton Station, Gilbert’s Cove, Ashmore, Weymouth North, Hillgrove, Barton and the mission of Doucetteville.

1958 was a landmark year for Holy Cross Parish as this marked the arrival of three Sisters of Our Lady of the Sacred Heart. These good sisters worked with the children of the parish and their parents, ministered to the sick and the troubled, and also worked with the youth of the parish. They left an indelible mark on the parish. 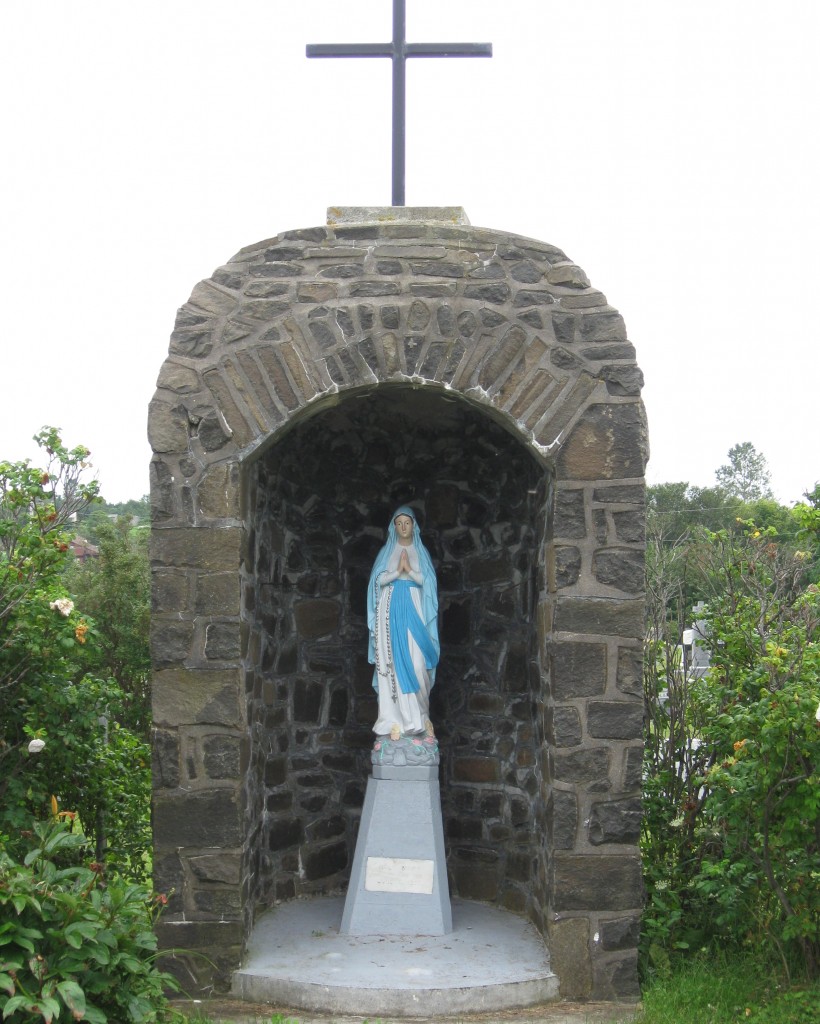 “The Grotto” at Holy Cross Cemetery