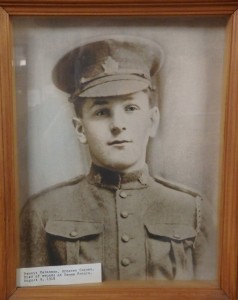 Joseph ‘Benoit’ Melanson was killed in action on August 9, 1918 and is buried at the Crouy British Cemetery, Crouy-Sur-Somme, France (Plot: V. D. 8). Benoit was one of 66,665 Canadian military personnel who died in World War I – The War That Will End War (H.G. Wells). Benoit was only 20 years old.

Joseph ‘Benoit’ Melanson was born March 21, 1898, the son of  John C. and Aimée Bourneuf Melanson, of Grosses Coques, Digby Co., Nova Scotia; Benoit, like so many other recruits, was just a lad of seventeen when he enlisted in the Canadian Infantry (Nova Scotia Regiment) – 25th Battalion on December 21, 1915 at the recruiting station in Yarmouth, Nova Scotia.

Until last year, I had never heard of the Memorial Plaque (or Memorial Medallion) which was issued after World War I to the next-of-kin of all British and British Commonwealth service personnel who were killed in action or died as a result of wounds suffered during the war. The Memorial Plaque  continued to be  issued into the 1930s to commemorate people who died as a consequence of the war.

The Memorial Plaque is about 5 inches (120 mm) in diameter and was cast in bronze. It has an image of Britannia holding a trident and standing with a lion; the designer’s initials, E.CR.P., appear above the front paw. In her outstretched left hand, Britannia is holding an oak wreath just above the deceased’s name cast in raised letters. Two dolphins swim around Britannia, symbolizing Britain’s sea power, and at the bottom a second lion is tearing apart the German eagle. The back of the Plaque is blank.

Pictured below is the Memorial Plaque given to the family of Joseph ‘Benoit’ Melanson (with a quarter alongside to give the reader an idea of the size of the plaque). Benoit’s family donated the Plaque to the Clare Branch of the Canadian Legion where it is prominently displayed in their showcase. I am very grateful that the Legion allowed me to handle and photograph it. 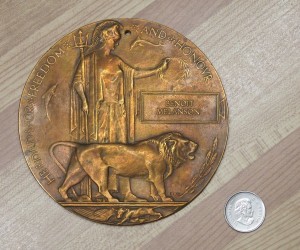 Along the outer edge, the legend reads “He died for freedom and honour”, or, for the six hundred plaques issued to commemorate women, “She died for freedom and honour”. The plaques were issued  with a commemorative scroll from King George V. I was not able to locate the scroll for Benoit Melanson but I was able to find one as an example; the one received by Benoit’s family would have been identical but with Benoit’s name inscribed at the bottom. 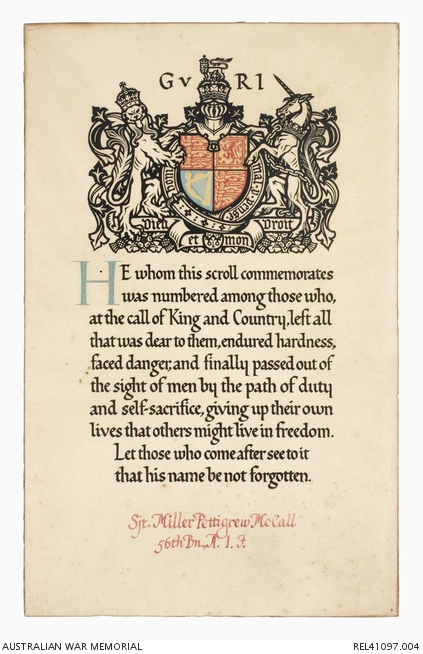 Also pictured here is Private Benoit Melanson’s gravemarker in Somme, France and his name in the First World War Book of Remembrance (Page 469).

Over time, I would like to commemorate the many individuals of Clare who made the ultimate sacrifice to ensure the freedom of millions.

I am very grateful to Colleen Fitzpatrick, PhD, forensic genealogist and author, for making me aware of the WWI Memorial Plaque thus sending me on my quest to research families in Clare (Baie-Sainte-Marie) who may have received a Memorial Plaque to commemorate their loved one.