The village of Doucetteville derives its name from David Doucette, also known as “le Grand David”. David Doucette was a son of Michel Doucette from Sluice Point, Yarmouth County; in the 1820’s, David Doucette moved to this densely forested site, seven miles inland from the community of Plympton, Digby County.  The area they settled soon became known as la “Ville des Doucette” or Doucette Settlement and later Doucetteville. Other families followed David Doucette to this inland community.

Take me to the Cemetery Page

In the early days, the spiritual needs of the community were met by the pastors at Holy Cross Parish (Plympton) and for the first 100 years there was no church in Doucetteville.

In 1915, a plot of land was donated by Angus Thibault and in the same year construction began on the new mission church under the direction of Father P.C. Thibault with John Oliver as foreman. The new church for what was to become Sacred Heart Parish in Doucetteville was completed in the fall of 1915 and the first mass celebrated on January 1, 1916. The new cemetery located right behind the church was blessed and the large cross erected in the centre.

The church was officially blessed on Sept 9, 1917 by Monseigneur Alphonse Côté of Stella Maris Parish (Meteghan) and Midnight Mass was celebrated for the first time that same year. The first wedding in Doucetteville was that of Willard Thibault and Marguerite Thibodeau on Feb 10, 1918. 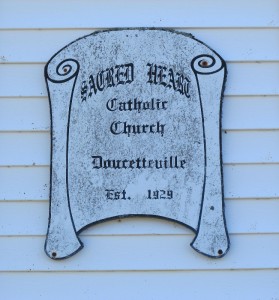 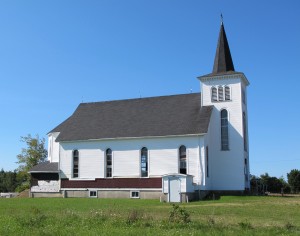 Sadly, the church of Sacred Heart Parish in Doucetteville was hit by lightning on March 16, 1929 and the church was destroyed.  Shortly after, the cornerstone of the new church was laid by Archbishop Alexander MacDonald amidst a large gathering and to great fanfare and construction began on the replacement church with Isaïe Belliveau as foreman;  Isaïe had also been the foreman for the construction of the magnificent granite church at Saint-Bernard. The new church was blessed on October 26th, 1919, only seven months after the destruction of the first church.