Of all the villages of Clare, Meteghan, during its peak shipbuilding years, was the most prolific. In 1931 the Digby Courier reported that 225 vessels between 100 and 500 tonnes had been constructed in Meteghan shipyards. During World War II, the Clare Shipbuilding Company started building wooden minesweepers in this location and employed up to 700 people with a payroll of half a million dollars. Their shipyard included 32 buildings and covered 12 acres of land. After the war, fishing boats were still being built but gradually new construction all but died out. The last large vessel to be launched here was a 167‑foot replica of the famous clipper ship FLYING CLOUD built in 1966. Elie Pothier continued building lobster fishing boats out of his shop in Saint Martin until his death in 1991. Today the only vestige left of the largest shipyard in Clare is the marine railway that is still operated by Comeau Marine. 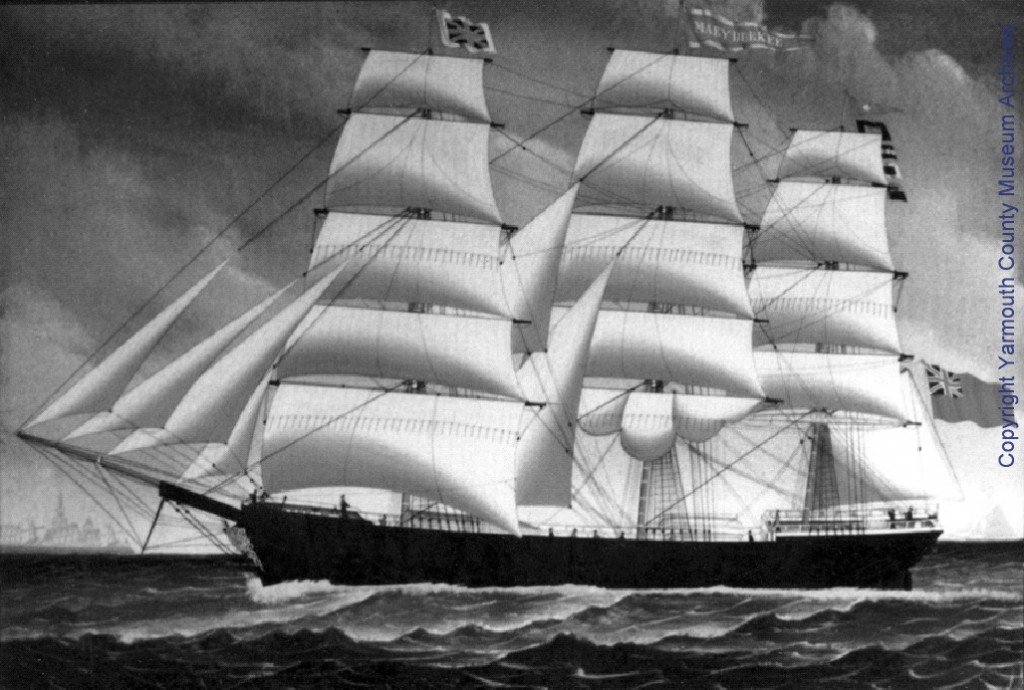 The full-rigged ship MARY DURKEE was built at Meteghan in 1861 for Amasa Durkee of Yarmouth. The ship had a gross registered tonnage of 880 tons and was sold to Norwegian interests in 1884. (Courtesy of the Yarmouth County Museum Archives, 1997:129.2) 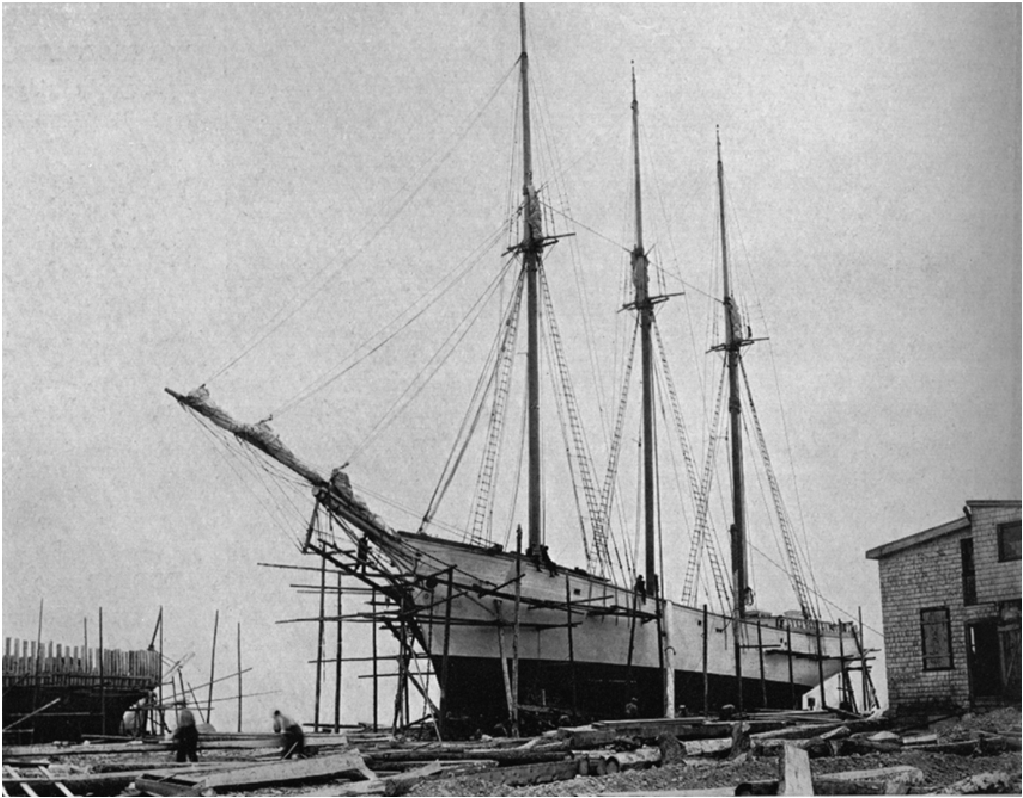 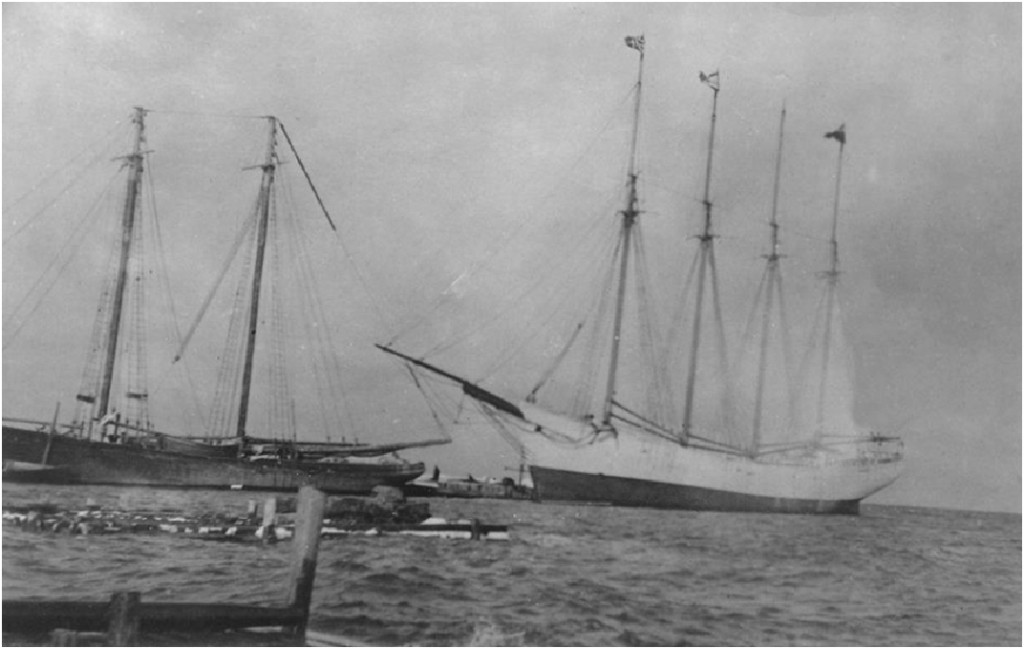 Four large schooners were built in Meteghan in 1918: the four-master REBECCA L. MACDONALD pictured above (right), the E. L. COMEAU, the J. E. BACHMAN and the SCOTIA BELLE. 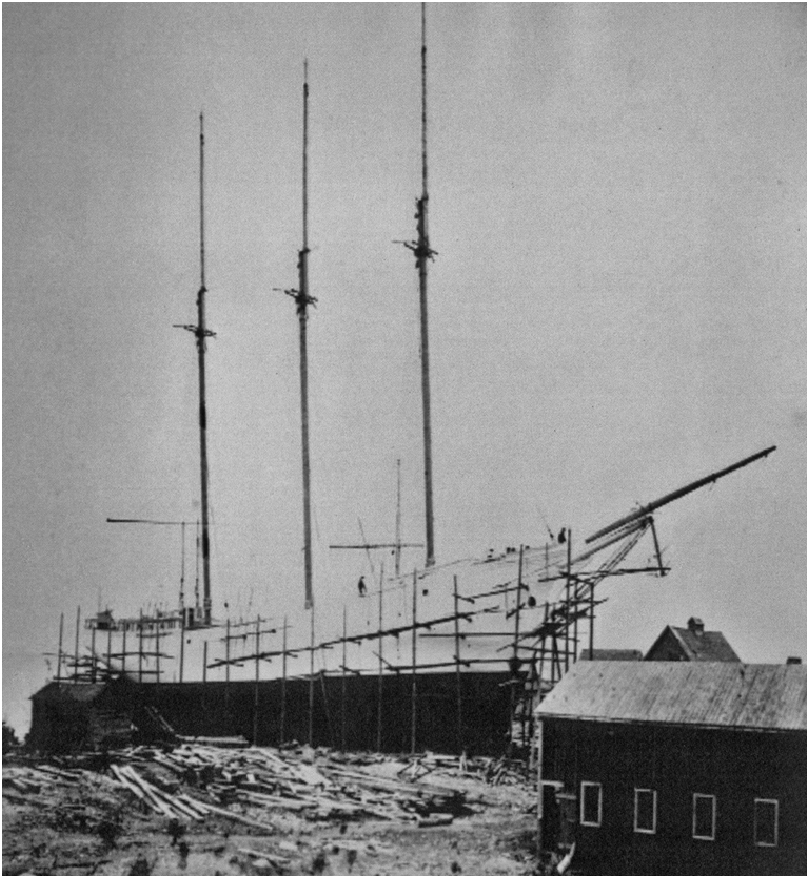 The E. L. COMEAU was the namesake of her Meteghan builder. She was later chartered to U.S. rumrunners, confiscated by authorities, and sold. In the picture shown below she can be seen heavily laden at some unknown port. 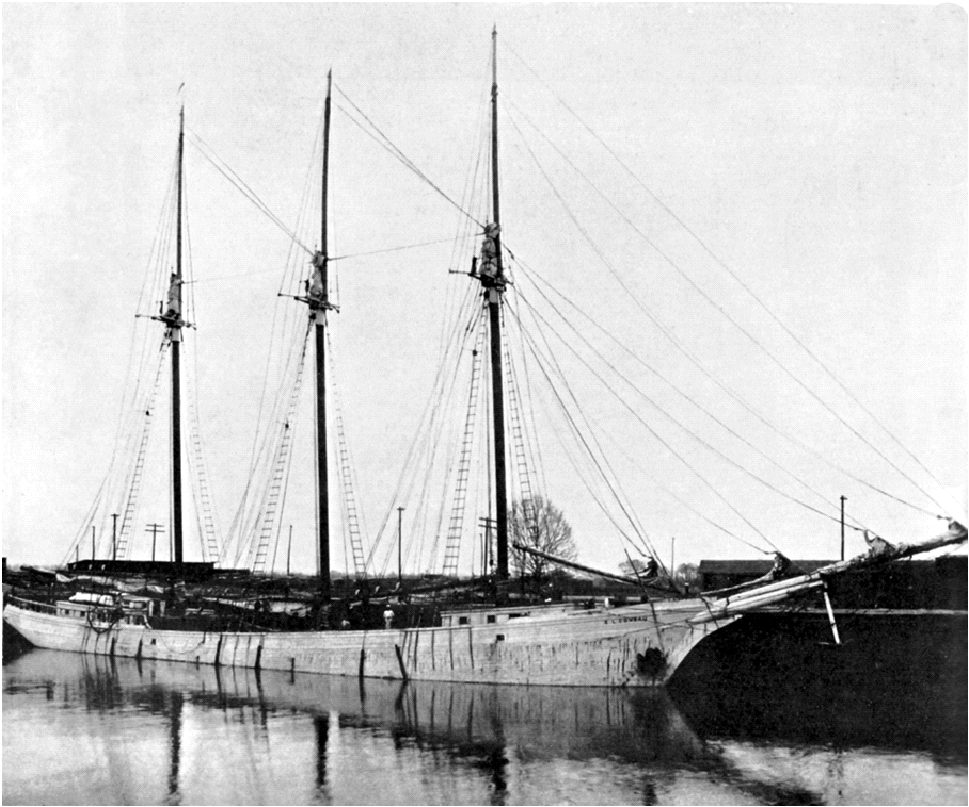 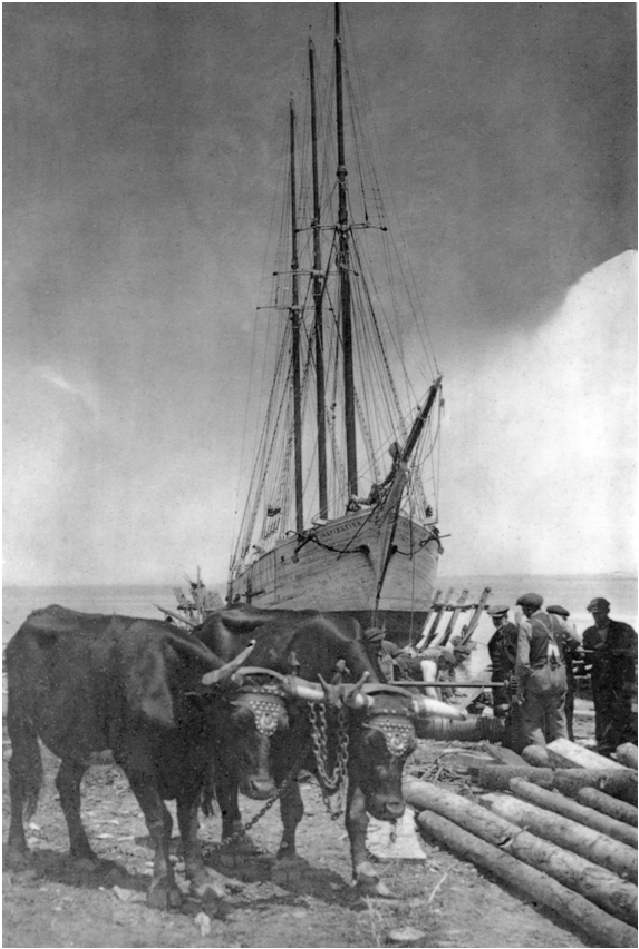 Meteghan had the first marine railway in Clare, built by Hilarion Deveau in 1890. In this scene the INSPIRATION, built at Conquerall Bank in 1917, is being re-launched. Oxen provided the ‘horsepower’ for many tasks in the shipyards. 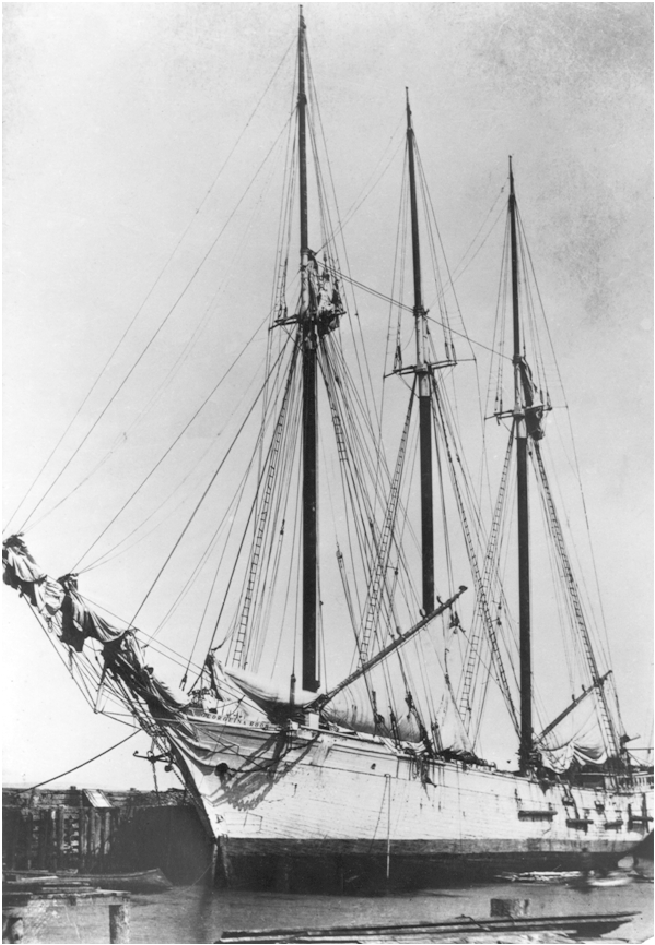 The GEORGINA ROOP was a tern built at Granville Ferry in 1906. In this photo she is in for repairs at the Meteghan wharf. The year is likely 1918, at which time she was extensively rebuilt and renamed PINELAND. A sister ship called MOTHERLAND was built in Meteghan for the same owners in the following year. 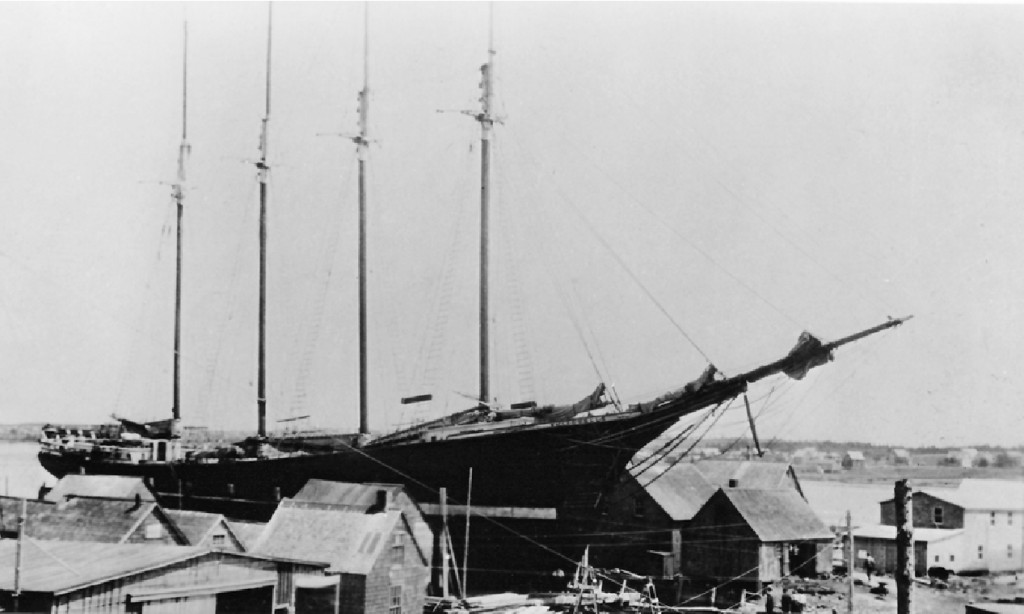 Two views of the 572-ton four-master WHITEBELLE built in Parrsboro in 1920. Up on the marine railway in Meteghan, she towers above the surrounding buildings. As can be seen in the pictures above and below, she was getting a whole section of her bow rebuilt. It is known that she ran ashore in 1928 and was subsequently repaired; those may be the restorations seen here. The WHITEBELLE traded out of the Bay of Fundy until her loss in 1931. 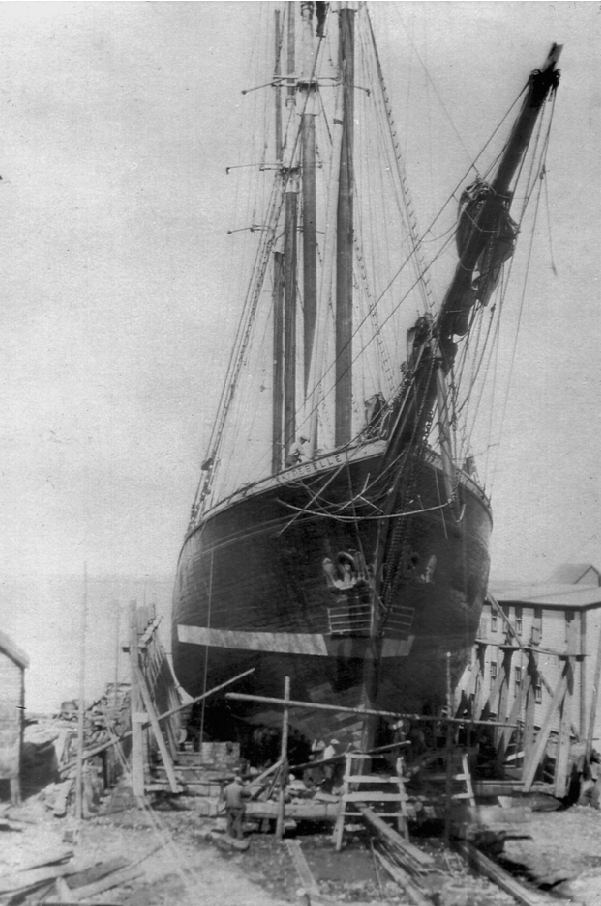 A father and son team employed at the Meteghan shipyard: 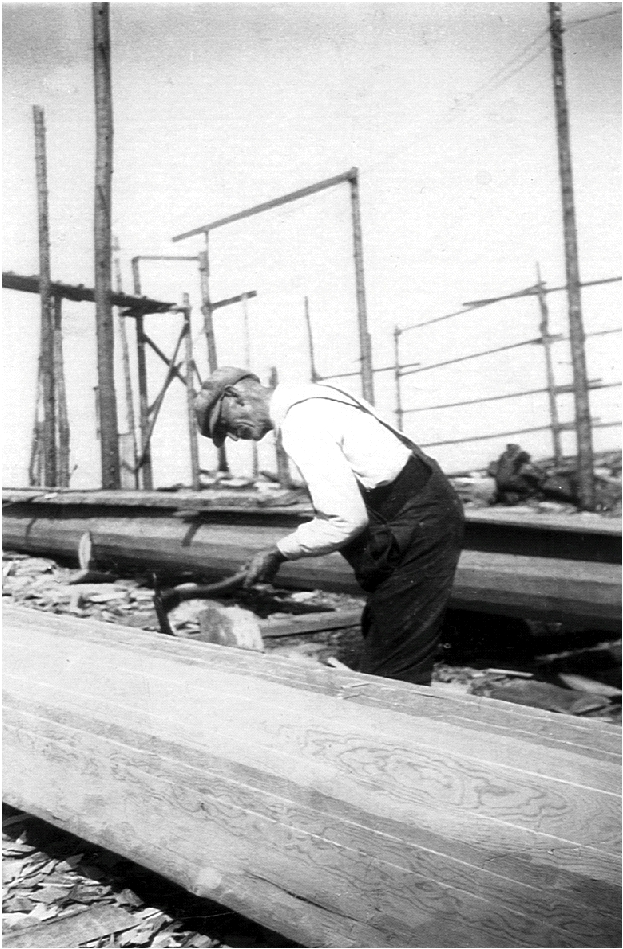 Charles Maillet working on a new Douglas-fir mast. The shaping of wood with an adze was called ‘dubbing’ and it was said that a skilled worker could pick up a coin from a wooden floor with his adze without nicking the floor. 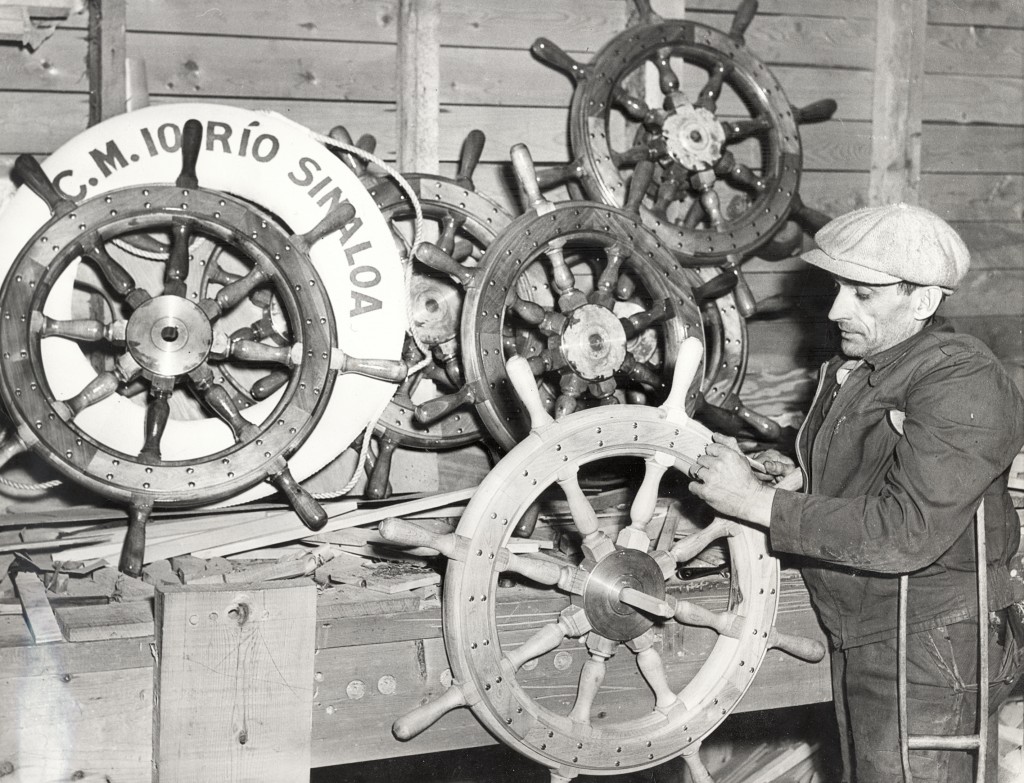 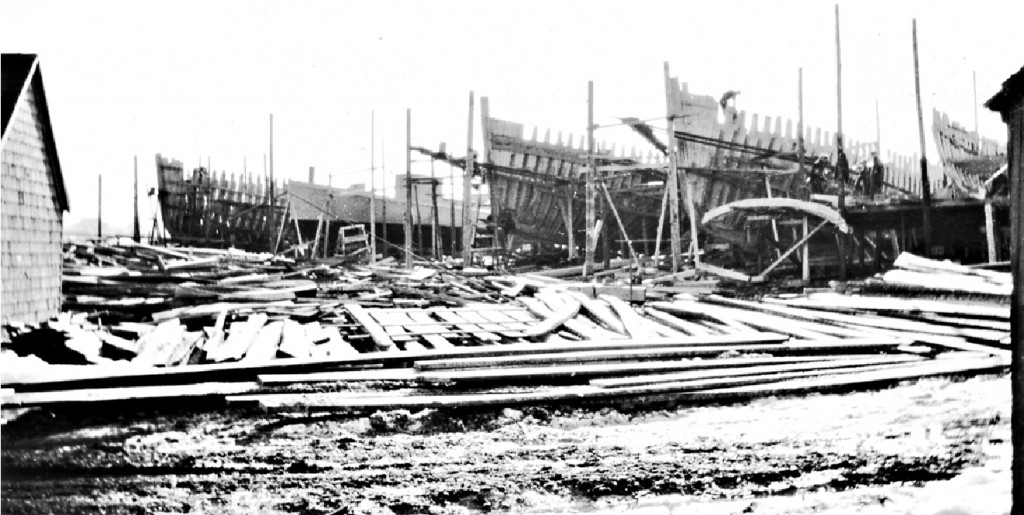 This photo dated 1930 shows a rash of activity on the Meteghan waterfront with the construction of numerous rumrunners. 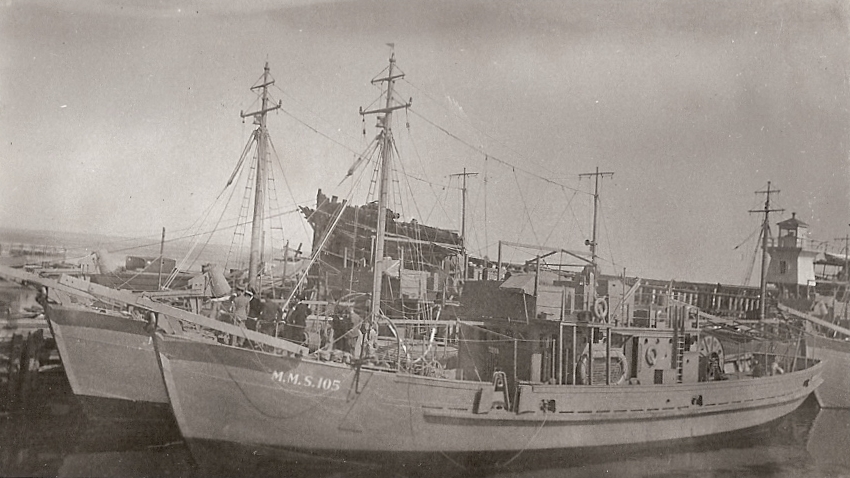 A few short years later wooden mine sweepers were commissioned for the war effort. Wood was the preferred building material, as it did not attract the magnetic mines designed to latch onto steel ships. According to The Yarmouth Herald, 27 such vessels were constructed. Meteghan was the only port in Eastern Canada where they were built. 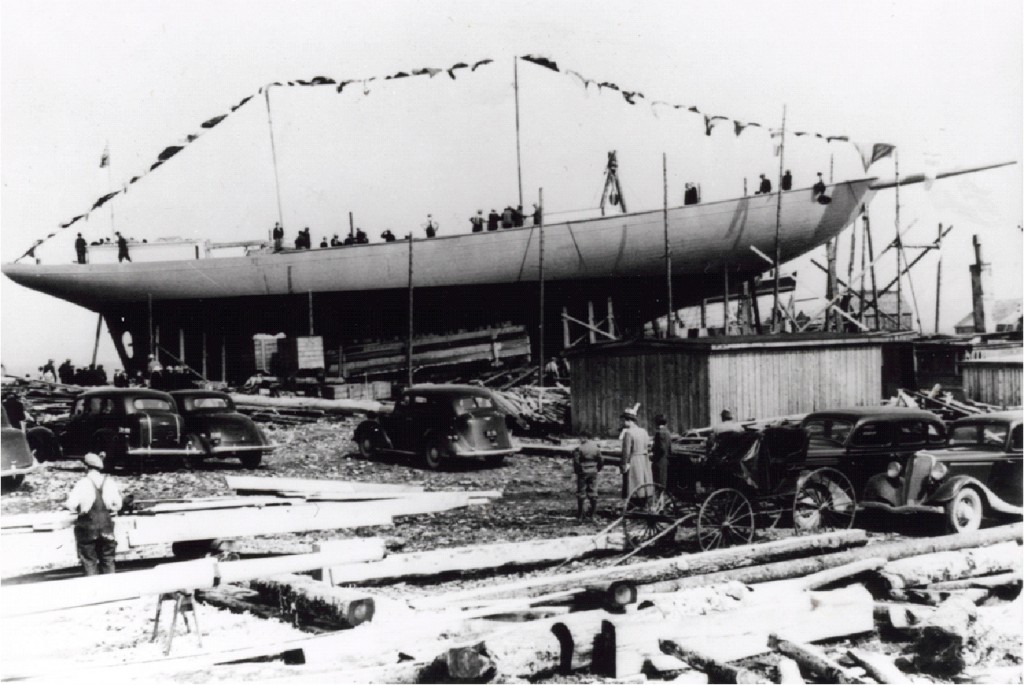 The last three-masted schooner built at Meteghan was the VENTURE. Launched in 1938, she was used as a training vessel for the Canadian navy. 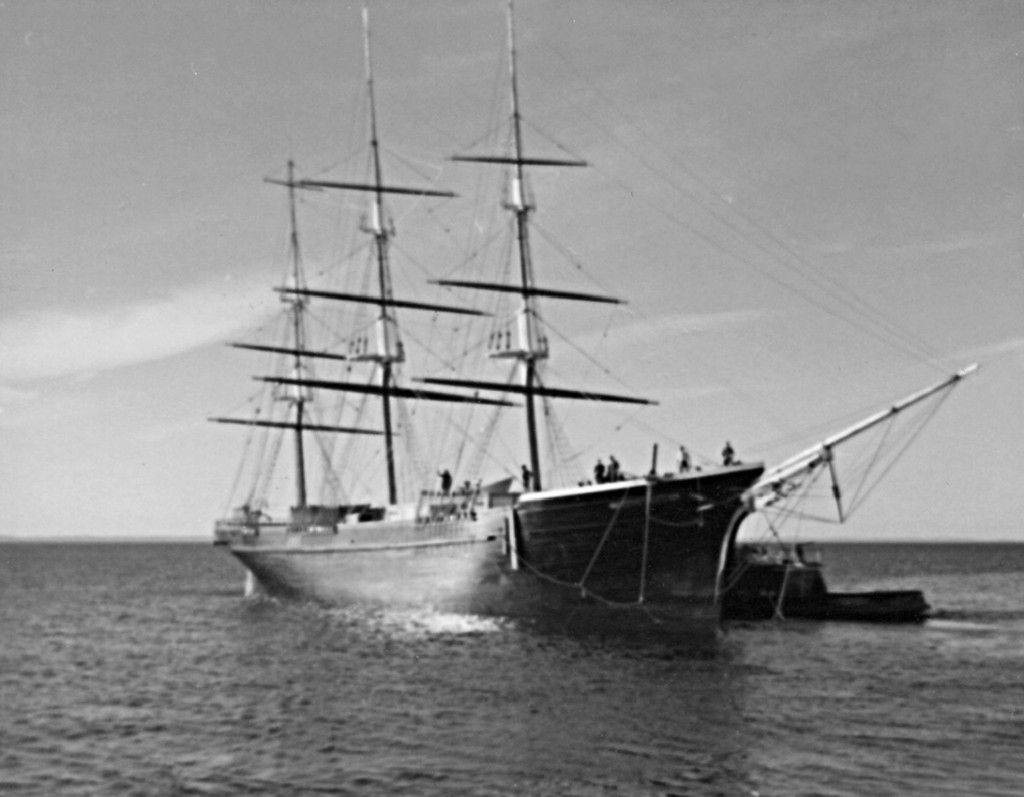 Old Meteghan shipwrights were able to demonstrate their skills one final time when they were called upon to build a replica of the famous clipper ship FLYING CLOUD launched on May 26th, 1966.