The mouth of the Meteghan River provided a natural refuge in which to establish a port. We know that by 1840 the locals had built a wharf and that vessels had been using it for several years. An old plan dated 1873 shows a shipyard just to the south of the wharf, near the location of the current day shipyard. This is about the same date that the local ship registries began listing commercial vessels being built in Meteghan River, the only village in Clare where large commercial ships are still being built.

According to the Canadian National Archives, the MARY A. LAW was built in 1890 at Meteghan River. She was 185 feet in length and had a registered gross tonnage of 939 tons. (Courtesy of the Yarmouth County Museum Archives, Ph-62-MARY A. LAW) 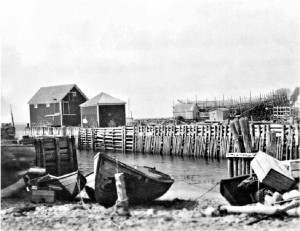 There were shipyards on both sides of the Meteghan River. The yard on the northern side belonging to the Clare Shipping Company can be seen here. The RICHARD B. SILVER was built on the south side of the Meteghan River in 1918 by the R. H. Howes Company. Note the relative size of the workmen readying her for her launch. The RICHARD B. SILVER starting to raise sail off the mouth of the river shortly after her launching. She had a very short career, being abandoned at sea in a sinking condition in April 1919. Her crew were safely landed ashore in French Guiana. Three tern schooners at the Meteghan River Wharf. The first two have just been launched, as seen by the dress flags, and the vessel on the right is the steam vessel that towed them in. The new schooners are very likely the MARIA A. HOWES built by the Howes Company and the CELESTE D. built by Edward Doucet, both launched in 1919. A scaffold is hung below the anchor of the foremost one to complete some unfinished work. (Courtesy of Aline Quinlan) A schooner being brought into Meteghan River harbour with the assistance of a steam ship. (Courtesy of Aline Quinlan) 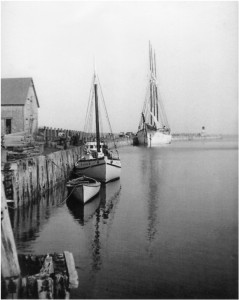 The last of an era; this scene depicts the overlap of the age of sail with the age of power. The wharf at Meteghan River was, at this time, almost 1000 feet in length!

At the same time that the sailing era was winding down, a young entrepreneur named Augustin Theriault was setting up a boatbuilding business next to the old shipyard on the south side of the river. A. F. Theriault & Sons Ltd. opened its doors in 1934 and, as of this writing, has built 620 vessels. Today it is the only remaining large shipyard in Clare.

“Gus” Theriault supervising construction of a ferry, circa 1950. A new pilot boat tasting the salt waters of Saint Mary’s Bay for the first time. She was launched from the Theriault yard in 1950. The LADY OF CLARE, one of several ships built by A. F. Theriault for Bernie Melanson of Gilbert’s Cove. A coastal freighter of 90 gross tons, she was launched in 1945. The art of building wooden sailing vessels was kept alive into the 1970s by the second generation of Theriaults. The BELLE PROVINCE is a replica of a revolutionary privateer built at the Meteghan River shipyard.

Shipwrights replacing the WANDA ELAINE’s stem. Denis Comeau is caulking the new planks while Emile Saulnier is wielding the pin maul and Clarence Saulnier is holding the countersink. Today most of the work carried on at A. F. Theriault is in steel, aluminium or fiberglass.